I spent part of the last two weeks savoring the art and architecture of Barcelona, entranced by the work of two artistic giants of Catalonia: Joan Miró and Antoni Gaudí. Both artists seem to revel in dualities. They take the straight lines of the manmade world and bend them. They take the unruly forms of nature and impose upon them an order. They seek to contain the universe in a box, to express infinity in their necessarily finite works.

This is already too much writing from me. Simply enjoy the words and works of these two artists. (The Miró here is all from the Fundació Joan Miró and the Gaudí from the Sagrada Família.)

Look for the noise hidden in silence, the movement in immobility, life in inanimate things, the infinite in the finite, forms in a void, and myself in anonymity.

The straight line is the expression of the infinite. 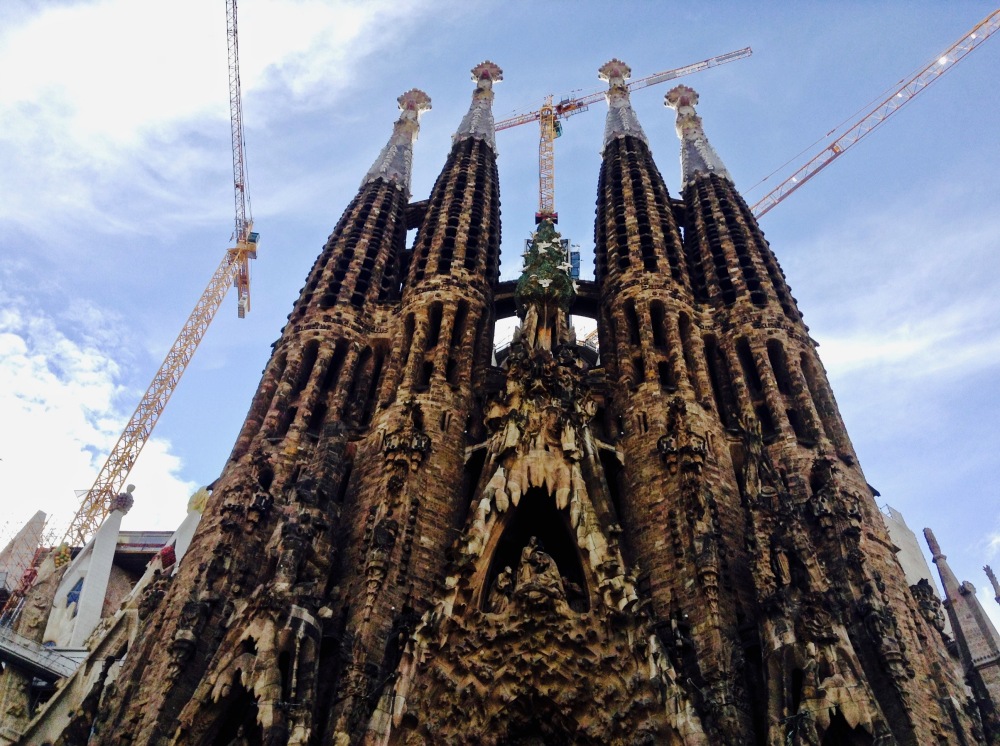 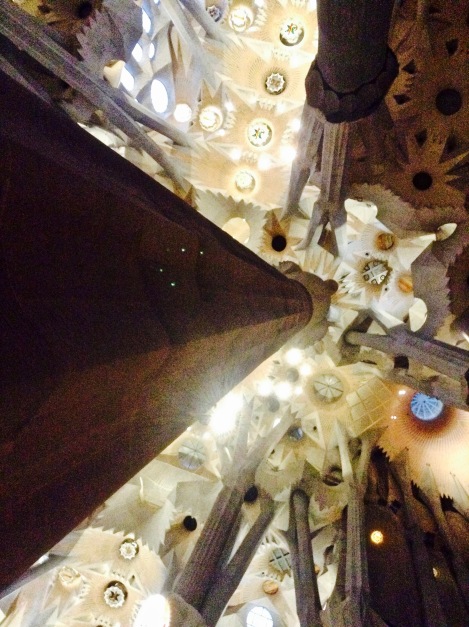 I’m traveling this week, so we have a guest post from the inimitable Ashutosh Kumar. Enjoy!

In Measuring II: The limits of measurability, we saw that there is no measure satisfying properties 1-6 that could be defined on all subsets of

. Relaxing one or more of these properties leads to some very interesting problems. We‘ll discuss one such variation today which is obtained by dropping the shift-invariance requirement.

The measure problem: Is it possible to assign to every subset

of the unit interval

such that the following requirements hold?
(1)  For every

of pairwise disjoint subsets of

Continuum Hypothesis: There is a linear ordering

that satisfies: For every

As I recall, it was sometime around 1928/1929, during one of my many discussions with Banach in the Scottish Cafe, that we got interested in the so called measure problem stated many years before by Hausdorff and still unresolved at the time. During a many-hour discussion we tried to tried to attack the problem in various ways, unsuccessfully. I got home around midnight. But I couldn‘t fall asleep until I had found a solution (to my great joy). I met Banach the following morning. “You know Stefan, I‘ve solved Hausdorff’s problem.” “So have I,” said Banach. What is more, it turns out my reasoning and Banach’s were almost identical: it was essentially a continuation of our discussion in the cafe. Obviously, we decided to publish it in a joint paper (in “Fundamenta”).

Let us prove Banach-Kuratowski’s theorem. Towards a contradiction, let us assume that there is a measure

that satisfies properties (1-4) above. Define

is a subset of the unit square

. It has the following property: For every

is countable. It follows that we can write

as a countable union of subsets

of the unit square, each of whose vertical sections contains at most one point.

Claim: We can write each

Proof of Claim: For each subinterval

whose endpoints are rational, let

. Then it is easy to check that

where the union runs over every subinterval

with rational endpoints. The number of such intervals is countable, since it is possible to list all pairs of rationals in a sequence.

. This allows us to use a basic fact from measure theory (Fubini‘s theorem) which yields the following.

Consequence of Fubini’s Theorem: If every vertical section of

-measure zero, then some horizontal section

Note that every vertical section of

is countable and therefore has

is countable, so it must have

-measure zero. But this means

This leaves us with the question: Can we show the non-existence of a measure satisfying properties (1-4) without any extra assumption? The answer lies in the hierarchy of large cardinals and we hope to get back to it soon.

Fin de siècle Paris. The 1900 International Congress of Mathematicians takes place in the city. David Hilbert gives the opening address, laying out his vision for the future of mathematics in a seminal list of 23 unsolved problems. First on the list is Cantor’s Continuum Hypothesis, the most prominent problem in the fledgling field of set theory. Motivated by the Congress, Hilbert’s speech, and a venerable professor receptive to Cantor’s radical ideas, three brilliant young French mathematicians make sudden, bold advances in set theory and analysis, changing mathematics forever in just a few short years.

Camille Jordan. A respected Parisian mathematician and professor. Introduces Cantorian set theory to Paris through his lectures. Makes substantial progress in measure theory by extensively studying a finitely-additive measure on certain sets of real numbers that comes to be known as the Jordan measure. Known for his unorthodox notational decisions.

Émile Borel. Doctoral thesis in 1898. Mathematician, socialite, politician. Member of the French National Assembly (1924-1936), Minister of Marine in the cabinet of Paul Painlevé (1925) (also a mathematician), member of the French Resistance during World War II. Introduces the class of Borel sets of real numbers and shows that a measure can be defined on them. Provides refuge to Marie Curie during her scandal of 1911. Becomes frustrated by set theory. Stops doing mathematics in 1914.

René-Louis Baire. Doctoral thesis in 1899. Early student of Borel. Grows up in a poor Parisian family, suffers his entire life from delicate health and agoraphobia. Feels the world treats him unfairly, does poorly on oral exams, is given teaching posts beneath his ability. Defines a new hierarchy of functions that goes beyond the continuous functions that had predominated in mathematics. Proves what becomes known as the Baire Category Theorem, one of the seminal theorems in general topology. Breakdowns in health lead him to leave mathematics around 1914.

Henri Lebesgue. Doctoral thesis in 1902: “Integral, Length, Area” contains many breakthroughs. Also an early student of Borel. Develops the theory of Lebesgue measure and Lebesgue integration. Lebesgue measure is a countably additive measure, extending the Jordan measure and forming the foundation for modern analysis. Strained relations develop between Lebesgue and Borel, his doctoral supervisor, over a number of issues, including the Dreyfus Affair and competition over priority for ideas in measure theory.

The Axiom of Choice. Introduced in the early twentieth century and instantly controversial for its assertion of the existence of sets that cannot be explicitly constructed. The young French mathematicians, who so readily adopted Cantor’s ideas on infinity, feel that the Axiom of Choice goes too far and retreat from their earlier explorations, and, in some cases, even from mathematics. Set theory, seemingly going against the strict rationalist tradition of the Enlightenment that prevails in France at the time, moves east, to Poland and Russia.

Higher infinities … have a whiff of form without matter, which is repugnant to the French spirit.

Like many of the young mathematicians, I had been immediately captivated by the Cantorian theory; I don’t regret it in the least, for that is one mental exercise that truly opens up the mind.

Such reasoning does not belong to mathematics.

-Borel, on the Axiom of Choice

I will try never to speak of a function without defining it effectively; I take in this way a very similar point of view to Borel … An object is defined or given when one has said a finite number of words applying to this object and only to this one; that is when one has named a characteristic property of the object.

Preview of Next Act:

Cracow, Poland, 1916: Hugo Steinhaus, fresh from his graduation in Göttingen, walks through a park and overhears a stranger say the words, “Lebesgue integral.” He introduces himself to said stranger, who happens to be Stefan Banach. The two go on to found the great Lwów school of mathematics, which revolutionizes set theory, topology, and analysis.